Save Money by Clearing Up Your Driving Record

Since 2010, Progressive auto insurance customers can request from their agent to remove accidents or violations that have expired midterm on their policies. This saves Progressive customers money.  The requirements are:

Checking multiple companies to find the one that offers a feature like this one is a great benefit of having an independent insurance agent. Click here to contact Bob Johnson Insurance, Inc., or call us at 865-922-3111.

When you are considering which car to purchase, you should factor in ABS.  Many people don’t know that ABS (anti-lock braking system) makes a difference:

As you can see, ABS is a very good feature to have.  It comes as a standard feature on many cars, but sometimes it is an add-on. As you look at cars, think of ABS like an umbrella. It’s better to have one and not need it rather than need it and not have it.

You might have heard someone say, “I pushed the brake pedal, and they locked up!” When your wheels lock up, you skid, you can hear the screech of the tires and often you see smoke and/or skid marks on the pavement.  Skidding isn’t good, but it is especially dangerous in rain, snow or ice. When it happens, you are at serious risk for losing control of the car and having an accident.

To “unlock” your wheels, you need to lessen the pressure on the brakes until the wheels start spinning again.  If you drive a car without ABS, instead of pressing on the brake and holding it, you need to apply pressure until just before the wheels would lock up.  If the wheels lock up or you are trying to keep them from doing so, you lessen pressure on the brake and then apply it once again (which is called “feathering”).  In the midst of bad weather or bad drivers around you, it’s not always easy to do.

That’s where ABS comes in.  ABS is designed to keep your wheels from locking up when you press the brakes.  With ABS, a computer will handle all that for you using wheel speed sensors, hydraulic units and electronic control unit. All these combined make up an ABS.

ABS is very useful in bad weather or during an emergency when you need to suddenly stop your car. It takes care of feathering your brakes so your wheels don’t lock up. (The ABS use sensors to monitor your brakes and keep them from locking at a sudden braking.) As a result, you maintain better control of your car in order to avoid a wreck. 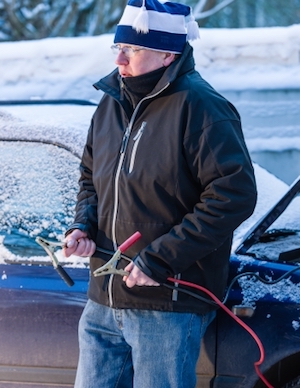 Getting stuck in the snow is not fun, but it could happen during the cold winter days.  It it happens, you need to be prepared.  Here are a few helpful items to include in your car so your winter driving can be as stress-free as possible:

Booster cables should be something you keep in your car year-round but especially in winter. Having a dead battery near night time is dangerous. Not only do the temperatures drop rapidly, but also makes it harder for you to see the road. Having booster cables gives you the right tool to jump start your car.

If you get stranded and there are no other cars around, you may be sitting in the cold for a while.  As  it gets darker, the temperature drops. It is wise to have some blankets to keep you warm until help arrives.

Having a Flashlight is another must-have item in your car year-round. Put simply, it lets you see in the dark “to help put those booster cables on.” A bright flashlight also makes it easier for people to spot/see you if it gets too dark.  Be sure to keep some extra batteries in the car and replace them periodically.

Having extra winter clothes in the car is also useful for a couple of reasons. If you get stranded, you might have to walk for help.  If you have a flat tire or other situation in which you have to get out of the car during bad winter weather, it is nice to have warm, dry clothes in case you step in a puddle of partially-frozen water or slip in mud or snow.  Being cold and wet is no fun.  It’s a good idea to have extra clothing with you.

Take some food with you in the car in case you are stuck waiting for help to come.  You might also consider keeping some non-perishable food in the car during the winter months as well.  Think of them as your emergency stash.  If you are in a remote area, be sure there are at least some high calorie foods in your “stash.”  Just like batteries for your flashlight, be sure to replace the foods periodically.