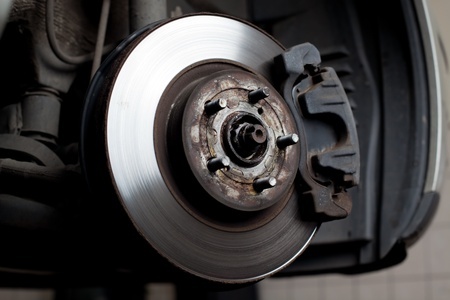 Most people don’t even think about brakes on their vehicle except when they need to be changed but consider how necessary brakes are in your life.  Your brakes help you and/or your family arrive safely at your destination. They also help you avoid the cost of accidents and claims on your insurance.  So this month, let’s take a look at:

A Short History of Brakes

We all know that brakes help you stop the car. However, do you really understand how they work? Brakes use a system of fluid-filled pipes that multiply force and move it from one place to another, but this system has a history.

Years ago when wheels were steel (think late 1800’s), brakes were a block of wood with a lever to hold it against the wheel. Drum brakes came out with the emergence of rubber tire. By the 1920’s hydraulics were added to a four-wheel braking system that used fluids to transfer force placed on a pedal ultimate to the brake shoes.

Drum brakes had been very popular, but because of their inadequate heat distribution, disc brakes began to be used. (You might find it interesting that though disc brakes were patented in the early 1900’s, they were not predominantly used until the 1950’s.) The problem were that disc brakes required great effort by the driver to press the brake pedal hard enough to easily stop the car. For this reason, they were dropped for a short time; however, power brakes were introduced in the 1960’s so that drivers did not have to apply as much force to the brake pedal.

Brakes are evolving much more slowly today. New technologies have emerged to aid the the same types of brakes.  We now have ABS,  electronic brake-force distribution (EBD), brake assist as well as other systems to help braking be as effective and safe as possible.  Even so, our modern-day brakes are still based on the same designs from the early 1900s.